Larens cosmeceuticals are an effective, but also non-invasive and safe method to achieve young and healthy looks. The results of their use that are first noticeable by the users are also scientifically proven in research. Innovative recipes, unique, luxurious ingredients, and quickly noticeable, very often spectacular effects reflect in the growing popularity of the brand, and new Larens products are being awarded by professional and consumer juries in Poland and Europe.

Transparency and development dynamics – they should characterise a reliable and prospective business project. Such one that is worth establishing cooperation with. We have the pleasure to inform you that WellU belongs to the elite of small and middle-sized companies according to the ranking of “Puls Biznesu”. We received even two awards from the magazine: Business Gazelle and e-Gazella of Business.

Gazelles of Business 2021 for WellU!

WellU company once again it has been included in the prestigious group of the most dynamic Polish enterprises from the SME sector! We are in 462nd place in the national ranking (from 4490 positions) and in 41st place in the Pomeranian Voivodeship. Gazelles of Business is the oldest, most reliable and most popular ranking of small and medium-sized enterprises in Poland. „Puls of Business” has been organising it continuously since 2000, carrying out the mission of supporting enterpreneurship. The ranking is based on the most objective criteria – financial results, and participation in it is free of charge. The pressence in the ranking means that the company belongs to the elite of small and medium-sized companies – not only is it dynamically developing, but also transparent.

E-Gazelles of Business 2021 for WellU!

Business Gazelles is the oldest and most reliable and most popular ranking of small and middle-sized companies in Poland. “Puls Biznesu” has been continuously organizing it since 2000, in its mission to support entrepreneurship. The ranking is based on the most objective criteria – financial results and participation in it is free of charge. In every edition of the ranking the company’s results for three previous years are examined. A company that meets all the below criteria can apply for Business Gazelle 2020 title:

Turnovers growth expressed in percent, generated during the three audited years (2019 vs. 2017) decide about the company’s position in the ranking.

WellU generated an increase of 183.69%, which placed us on the 48 position in pomorskie province and 522 position out of 4733 positions in Poland. 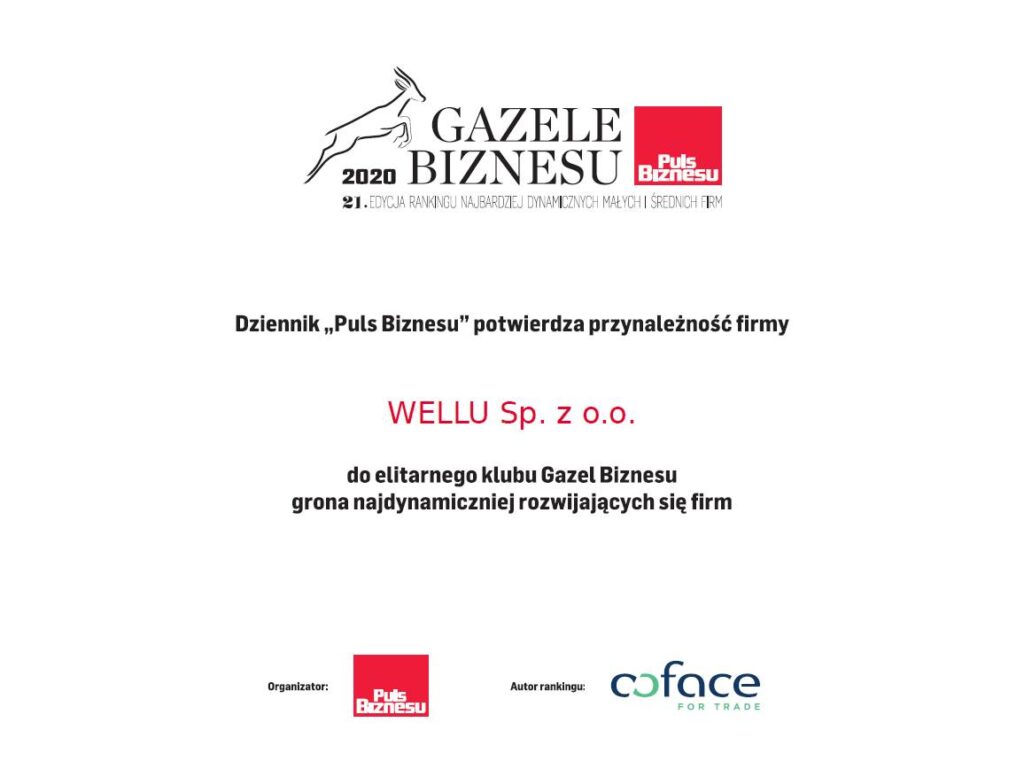 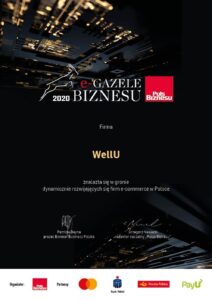 In the ranking e-Gazelle of Business WellU Sp. Z o.o. was placed at 47 position out of 267.

The Certificate of Reliability is an updated document, confirming that the company is not entered in the National Debt Register BIG Inc. It means that the company has no unpaid liabilities entered in the above mentioned debtors’ ledger. WellU, as a company certified as a “Reliable Company”, is a credible and reliable business partner that can be trusted. 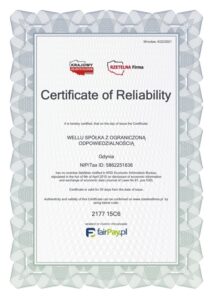